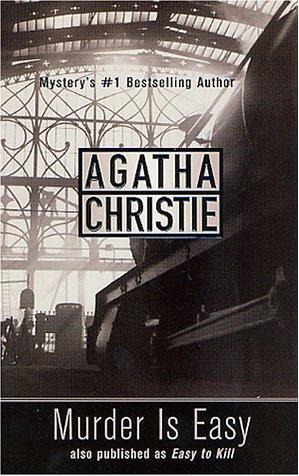 Luke Fitzwilliam happens to share a London-bound train carriage with Lavinia Pinkerton, an elderly lady who informs Luke that she is travelling to Scotland Yard to report a serial killer, responsible for the deaths of three people i.e. Amy Gibbs, Tommy Pierce and Harry Carter, and that another man, Dr John Humbleby, will be the next victim. Luke, unsure of how to respond, feels that this is unimportant and pays lip service only.

However, he is soon surprised to find the obituaries of not only Miss Pinkerton, who has been killed in a hit-and-run car accident, but also a Dr Humbleby, who has died of septicaemia. Luke, a retired policeman, travels to this seemingly quiet village, Wychwood under Ashe, and poses as a researcher for witchcraft and superstition to try and uncover the true murderer. Staying in a large estate with the wealthy Gordon Whitfield and pretending to be a cousin of Bridget Conway, Whitfield's fiancee, he makes inquiries into the deaths. He and Conway receive the assistance of Honoria Waynflete, an elderly but observant spinster whom they believe may know the identity of the person behind the deaths. By asking several villagers – including Mr Abbot, a solicitor who fired Tommy Pierce from his service due to an incident with a letter; the Rev. Mr Wake, local preacher; Mr Ellsworthy, an antique shop owner who appears to be mentally insane, and Dr Thomas, Humbleby's medical partner (who had had several rows with Humbleby and would have benefited from his death) – it becomes apparent that the deaths had been understood to be accidents. Amy Gibbs died after confusing her cough remedy with hat paint in the dark, Tommy Pierce died from falling off the library roof after cleaning the windows, Harry Carter fell from a bridge while drunk and drowned in the mud, and Humbleby died from a cut that became infected. Luke learns that Mrs Lydia Horton was another victim of these "accidents" -– she was recovering from acute gastritis and was progressively getting better before she had a sudden unexpected relapse and died.

Luke believes Ellsworthy to be the killer - he had shown signs of mental instability, and Luke's suspicions are further aroused after he sees Ellsworthy arriving home with blood on his hands, though this later is proved to be blood from a hen he sacrificed with his friends as part of a pagan ritual. Later on in that day, Luke and Miss Waynflete witness Whitfield arguing with his chauffeur, Rivers, who had taken Whitfield's Rolls-Royce for a joyride. Shortly after this event, Rivers is found dead, with his skull caved in by a stone pineapple which Whitfield had outside his house for decoration. Luke and Bridget have realised that they are in love with each other, and Bridget tells Gordon of her decision to break off the engagement. Gordon, ordering Luke to his study, makes a very suspicious statement. He claims, with some satisfaction, that God, executing divine justice upon wrongdoers, kills people that do him harm. Whitfield notes as examples that Mrs Horton had argued with him, Tommy Pierce did mocking impressions of him, Harry Carter shouted at him while drunk, Amy Gibbs was impertinent to him, Humbleby disagreed with him on the village water supply, and Rivers used his car without permission and then spoke disrespectfully to him; and all of them died soon afterwards. Whitfield predicts that Luke and Bridget, having wronged him, will soon meet their fates too. This sudden turn of events makes Luke change his mind about who is responsible for the deaths. It seems obvious under the circumstances that Whitfield must be the murderer. He consults Miss Waynflete, who confirms his suspicions, and tells him of how she knew he was insane: when they were both young, Waynflete and Whitfield had been engaged to be married. But one evening, Whitfield killed one of her canaries that she kept as a pet, with the appearance that he enjoyed doing it. She knew from that moment on that Gordon went too far on subjects – so far that he would kill those who wronged him even slightly or trivially.

Luke and Bridget decide that Bridget should leave Whitfield's estate to stay at Miss Waynflete's house, to be protected from Gordon. Luke goes off to collect their luggage and prepare to leave, while Bridget and Honoria go for a walk in the woods. It is at this point that a sudden twist in the plot occurs – Honoria, of whom Bridget has had a nagging suspicion, reveals herself to be the murderer. During her engagement to Whitfield, Honoria had killed her own pet canary after it bit her, which prompted Gordon to abandon the engagement. She vowed revenge on Gordon, and eventually decided to have him hanged for crimes he did not commit. She came up with the plan to kill anyone with whom Gordon had any trouble, eventually leading his ego to become inflated with the idea (which she suggested to him) that God exacted immediate retribution from those who disrespected him. Honoria regularly visited Lydia Horton, to whom Whitfield had sent some grapes, and was able to poison her tea. Honoria next killed Amy by swapping the bottles around in the night and locking the door from the outside using pincers -– the fact that she died from hat paint would have suggested an old-fashioned touch, linking it in Luke's mind with an older man, like Gordon. She killed Carter by pushing him off the bridge on the day he had a row with Gordon, and she likewise pushed Tommy Pierce out of the window while he was working. Whitfield had been the one to assign this job to Tommy, so that made him look suspicious.

Lavinia Pinkerton had observed Honoria staring at Humbleby as he and Whitfield argued, and she realised that Honoria must be the killer, and that Humbleby would be her next victim. Suspecting that Lavinia had figured out the truth, Honoria followed Lavinia into London. Just after Lavinia and Luke had parted ways, Honoria pushed the other woman in front of a car that happened not to stop. Honoria framed Whitfield by giving a nearby witness the registration number of Whitfield's Rolls-Royce. After inviting Humbleby round to her house, she was able to cut his hand with scissors, supposedly by accident. She then convinced him to let her apply a dressing to the wound. She had previously infected the dressing with pus seeping from her cat's ear, and Humbleby died a few days later from blood infection. After witnessing Rivers being sacked, Honoria hit him with a sandbag and caved his skull in with the stone pineapple -– it would have appeared suspicious as it was a decoration that only Gordon chose. Finally, she drugged Bridget's tea (which, fortunately for Bridget, she had not actually drunk) and took her into the woods, where the two of them began talking. Honoria then reveals a knife covered in Whitfield's fingerprints, and informs Bridget that she will kill her and leave the knife at the scene. Whitfield's fingerprints on the knife that killed the woman who had just jilted him would be damning evidence against him. Furthermore, Honoria had arranged for Whitfield to be seen walking alone through the very area where Bridget's body would be found. According to Honoria's plan, Whitfield would be condemned as a murderer and would surely be hanged. Bridget, who was about to have her throat slit, fights with the older woman, who has the wiry, mad strength of the truly insane. Having himself realised that Honoria was the killer, Luke arrives on the scene and saves Bridget. With the case over, Bridget and Luke decide to leave the village once and for all, to live their lives together as a married couple.