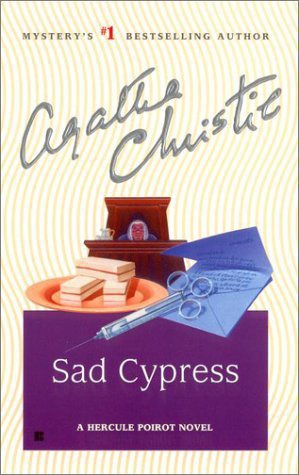 Elinor Carlisle and Roddy Welman are engaged to be married when she receives an anonymous letter claiming that someone is "sucking up" to their wealthy aunt, Laura Welman, from whom Elinor and Roddy expect to inherit a sizeable fortune. Elinor is niece to Mrs Welman, while Roddy is nephew to her late husband. Elinor suspects Mary Gerrard as the topic of the anonymous letter, the lodgekeeper's daughter, whom their aunt likes and supports. Neither guesses who wrote the letter, which is burned. They visit their aunt at Hunterbury. Roddy sees Mary Gerrard for the first time in a decade. Mrs Welman is partially paralyzed after a stroke and dislikes living that way. She tells both her physician Peter Lord and her niece how much she dislikes living without full health, wishing the doctor might end her pain, which he refuses to do. Roddy falls in love with Mary; this provokes Elinor to end their engagement. After a second stroke, Mrs Welman asks Elinor to make provision for Mary. Elinor assumes there is a will her aunt wants modified. Mrs Welman dies before Elinor can call the attorney. There is no will. She dies intestate, so her considerable estate goes to Elinor outright as her only known surviving blood relative.

Elinor settles two thousand pounds on Mary, which Mary accepts. Elinor sells the house she inherited. Mary dies of morphine poisoning at an impromptu lunch at Hunterbury, as Elinor, at the house, and Mary with Nurse Hopkins, at the lodge, are clearing out private possessions. Everyone at the house had access to the morphine Nurse Hopkins claimed to lose at Hunterbury while Mrs Welman was ill. Elinor is arrested. Later, it is learned that her aunt died of morphine poisoning, after the body is exhumed. Peter Lord, in love with Elinor, brings Poirot into the case. Poirot speaks to everyone in the village. He uncovers a second suspect when Roddy tells him of the anonymous letter - the writer of that letter. Poirot then focuses on a few elements. Was the poison in the sandwiches made by Elinor, which all three ate, or in the tea prepared by Nurse Hopkins and drunk by Mary and Hopkins, but not by Elinor? What is the secret of Mary's birth? Is there any significance in the scratch of a rose thorn on Hopkins's wrist? The denouement is revealed mainly in the court, as the defence lawyer brings witnesses who reveal what Poirot uncovers.

A torn pharmaceutical label that the prosecution says is from morphine hydrochloride, the poison, is rather a scrap from a label for apomorphine hydrochloride, an emetic, made clear because the m was lower case. The letters Apo had been torn off. Nurse Hopkins had injected herself with the emetic, to vomit the poison that she would ingest in the tea, explaining the mark on her wrist – not from a rose tree that is a thornless variety, Zephirine Drouhin. She went to wash dishes that fateful day for privacy as she vomits, looking pale when Elinor joins her in the kitchen. The motive was money. Mary Gerrard was the illegitimate daughter of Laura Welman and Sir Lewis Rycroft. Had this been discovered sooner, she would have inherited Mrs Welman's estate. Nurse Hopkins knows Mary's true parents because of a letter from her sister Eliza some years earlier. When Hopkins encouraged Mary Gerrard to write a will, Mary named as beneficiary the woman whom she supposes to be her aunt, Mary Riley, the sister of Eliza Gerrard, in New Zealand. Mary Riley's married name is Mary Draper. Mary Draper of New Zealand it turns out is Nurse Hopkins in England, as two people from New Zealand who knew Mary Draper both confirm in court. Hopkins leaves the courtroom before the judge can recall her.

Elinor is acquitted, and Peter Lord takes her away from where reporters can find her. Poirot talks with Lord to explain his deductions and actions to him as he gathered information on the true murderer, and how the "quickness of air travel" allowed witnesses from New Zealand to be brought to the trial. Poirot tells Lord he understands his clumsy efforts to get some action in Poirot's investigation. Lord's embarrassment is alleviated by Poirot's assurance that Lord will be Elinor's husband, not Roddy.