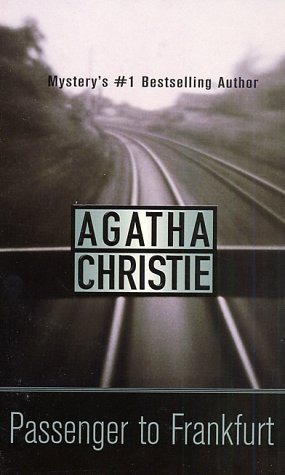 Sir Stafford Nye's flight home from Malaya takes an unexpected twist when the bored diplomat is approached in an airport by a woman whose life is in danger. He agrees to lend her his passport and boarding ticket. Suddenly, Stafford has unwittingly entered a web of international intrigue, from which the only escape is to outwit the power-crazed Countess von Waldsausen who is hell-bent on world domination through the manipulation and arming of the planet's youth, which brings with it what promises to be a resurgence of Nazi domination.

Unwittingly the diplomat has put his own life on the line. His great-aunt Matilda hints to him of a terrible world-wide conspiracy that has something to do with Richard Wagner and "The Young Siegfried". When Nye meets the mystery woman again, he finds himself drawn into a battle against an invisible and altogether more dangerous enemy.

Nye, along with the mystery lady from the plane, "Mary Ann" (aka Daphne Theodofanous or Countess Renata Zerkowski), is invited into a secret ring of British members of the government, led by the retired Lord Altamount and including a character featured in many Christie novels, the master of international finance, Mr. Robinson. This group is investigating and fighting the Countess's secret Nazi superpower.

Back in World War II, Adolf Hitler went to a mental institution, met with a group of people who thought they were Hitler, and exchanged places with one of them, thus surviving the war. He escaped to Argentina where he married and had a son who was branded with a swastika on his heel. The Countess, however, has a son whom she also branded with a swastika and substituted for Hitler's son. Meanwhile, the secret British government group explains in many long expository chapters about how drugs, promiscuity, and student protests are all secretly caused by Nazi agitators who want to bring about anarchy so that they can re-build fascism. One of their group is probably a traitor.

Nye then meets with his great-aunt Matilda again. She goes off to the Alps in a wheelchair to meet with the Countess, who was her schoolmate many years ago. Matilda tells Nye about a scientist, Professor Shoreham, who invented something called Project B, or "Benvo", which is a riot-control drug that makes people altruistic but also may lobotomize them. Shoreham had a stroke, can not communicate well, and has spent years doing nothing but listen to music; he destroyed all records of Project B. When the traitor from the government group tries to kill Lord Altamount, the shock of the violent incident brings miraculous recovery to Shoreham, who resolves to go back to work on his project.

The final chapter is an epilogue set some time later, with Nye at Matilda's house preparing for his upcoming marriage to Mary Ann. It is implied that the false son of Hitler is about to become the organist at their church. Sybil, Nye's niece, bursts in and chatters. The book ends with Stafford contemplating Sybil's stuffed panda and inviting it to be the best man at his wedding.