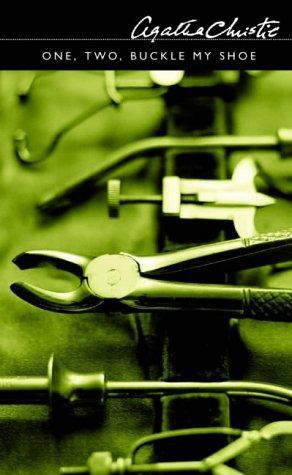 Hercule Poirot leaves the office of his dentist, Morley, after an appointment, and notices the arrival of Mabelle Sainsbury Seale. He returns to her the shiny buckle that has fallen from her shoe. Later, he hears from Inspector Japp that Morley has died of a gunshot. Between Poirot's appointment and Morley's death there were only three patients: Alistair Blunt, a banker; Mabelle Sainsbury Seale; and a Greek secret agent and blackmailer, surnamed Amberiotis. The presence of Blunt, a man thought essential to Britain's economic survival, ensures Japp's involvement in the case. Amberiotis dies of an overdose of anaesthetic and it is thought that the dentist has killed himself after realising the accident for which he had been responsible; but Poirot does not believe this. The movements of people at the dental surgery are inconclusive. Morley's partner, Reilly, seems to have no motive. Morley's secretary had been called away by a fake telegram. Her sleazy boyfriend, Frank Carter, had a weak motive, given that Morley had attempted to dissuade her from seeing him. Also present at the surgery was Howard Raikes, a hard-nosed American left-wing activist, violently opposed to Blunt but enamoured of Blunt's niece, Jane Olivera. Poirot has a long discussion with another patient from that day, a retired civil servant from the Home Office, Mr Barnes, who knows that Amberiotis is a spy, and suspects that Blunt was the actual target of the murder: "They're out after Blunt all right. That I know."

When Mabelle Sainsbury Seale goes missing, Poirot's fears are realised. A search for her is conducted, and some time later her body is apparently found in a sealed chest in the apartment of Mrs. Albert Chapman, who has herself disappeared. The face of the corpse has been smashed in, and Poirot notices the dead woman's dull buckled shoes. He is sceptical of the theory that Mrs Chapman has killed Sainsbury Seale and fled. Sure enough, once the dental records are produced, it is discovered that the corpse is that of Mrs Chapman. Poirot is now drawn into the life of the Blunt family. An attempt is made on Blunt's life; Raikes happens to be a bystander. Poirot is invited down to Blunt's house, where he is persuaded to undertake a search for Sainsbury Seale. While he is there, a second attempt is made on Blunt's life, but it is seemingly thwarted by Raikes. The pistol used in the attack is found in the hand of none other than Frank Carter, who has taken a job as gardener at the house under a false identity.

When Agnes Fletcher, a maid in Morley's apartment, admits to having seen Carter on the stairs going down to Morley's office, it seems that Carter is likely to be tried and convicted of both the murder and the attempted murder. The fact that the gun with which he was captured was the twin of the murder weapon only makes things worse for him. At the climax of the novel Poirot realises that by allowing Carter to persist in his lies he can ensure that the real killer goes free, and wrestles with his conscience. Eventually he presses Carter to admit the truth: that he had seen two people leave Morley's surgery, and that when he entered it the dentist was already dead. This is the final element in the puzzle.

Poirot visits Alistair Blunt and explains the murders. The real Mabelle Sainsbury Seale had known Blunt and his first wife, Gerda, when she and Gerda were both actresses in India. Gerda is masquerading as Helen Montressor, a distant Canadian cousin currently living on Blunt's estate. Blunt's money came from his now-deceased second wife, but he and Gerda never divorced; if the fact of Blunt's bigamy were known, he would be disgraced and ruined. Running into Blunt in the street, Mabelle Sainsbury Seale had recognised and spoken to him in front of his niece, but had not realised that he was now the prominent banker. She had mentioned this chance encounter to the blackmailer, Amberiotis, who made the connection between the name 'Blunt' and the wealthy banker, and began to blackmail him.

Gerda, posing under several aliases including that of Mrs Albert Chapman, invited Sainsbury Seale to visit her, killed her, and took her identity; but she had to buy new shoes because those of Sainsbury Seale did not fit her. This is why the buckles on the shoes found on the corpse were dull, whereas the buckle of the woman whom Poirot met going into Morley's surgery was shiny: the fake Mabelle had newer shoes. The woman in the trunk could hardly have worn through a new pair of shoes in a single day. Ironically, the face of the corpse had been disfigured not because it wasn't Mabelle Sainsbury Seale, but because it was.

Poirot summarises the murders of Morley and Amberiotis as follows: Blunt attended his own dental appointment, at the end of which he shot Morley, and rang for the next patient. He pretended to leave the building just as the fake Mabelle was shown up for her appointment with the now-dead dentist. Blunt joined his wife, and together they stashed the dentist's body in the side office. They exchanged the dental records of "Mrs Albert Chapman" and Mabelle to ensure that the corpse would be identified as Mrs Chapman: a woman who in reality did not exist. Blunt then dressed as the dentist. Gerda, now impersonating Mabelle, left the office, while Blunt, now posing as the dentist, rang for the next patient. He administered the fatal overdose to Amberiotis, a new patient who had never met Morley. As soon as Amberiotis left, Blunt changed out of his dentist's disguise, moved the dentist's body back into the surgery, posed the body to appear as a suicide, and surreptitiously departed, without ringing for a new patient. Frank Carter, hiding on the stairs, saw both Amberiotis and Blunt leave, and then entered the surgery to speak to Morley, only to discover the body (whose blood had by now dried), at which he fled in a panic.

At the conclusion, Poirot is forced to admit that Blunt does indeed stand in public life "for all the things that to my mind are important. For sanity and balance and stability and honest dealing". Nevertheless, he adds: "I am not concerned with the fate of nations, Monsieur. I am concerned with the lives of private individuals who have the right not to have their lives taken from them." Stating that he does not feel that Blunt's claims to be needed in the world justifies the deaths that resulted from his plan, he turns Blunt over to the police. Later, he speaks with Howard Raikes and Jane Olivera, telling them that they now have the "new heaven and the new earth" that they desire, asking them only to "let there be freedom and let there be pity". In the last chapter, Barnes tells Poirot that he took a strong interest in the case as his (Barnes's) own undercover sobriquet was Albert Chapman, but he had never been married.